Thank you for picking interest to sponsor 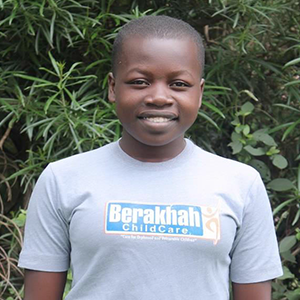 Moreen is eighteen years old. She comes from a family of nine. At eleven years, a tragedy befell the family that was memorable when her father committed suicide and died.  Her mother had to take on family responsibilities with no assistance. Moreen’s mother sells in a kiosk but life is very difficult to meet all the family needs effectively. Moreen was born with sickle cells and has to go for routine review because of her health status which is very expensive yet the mum found it difficult to meet the constant medical bills.

While at home, Moreen’s domestic duties were; collecting firewood, cooking, washing utensils, sweeping the compound and cleaning the house. She is in high school with an average performance at school and a desire of becoming a nurse.  During her free time, she enjoys playing netball with her friends.

At Berakhah childcare, she participates in singing and dancing. Moreen socializes with others freely because of the family bond. Her hope is made alive having found a belonging and knowing the love of God. Because of your partnership, children just like her, will reach greater heights physically, spiritually and mentally. Thank you!